Abram spent the early years of his career farming, and his experience driving tractors helped to develop his skill as a truck driver, which is how he has spent the major part of his working life. He assists the establishment and disestablishment team, making him a knowledgeable, versatile member of the company.

Having joined MES in 2006, Abram specialises in transporting cranes and lifts wherever they are needed around the country. This, obviously, entails driving long distances, and Abram relies on his skills honed over several years to ensure his loads arrive at their destination safely and on time. It’s a job he enjoys greatly: “I feel good when I am driving,” he says.

However, he admits that he is looking forward to his upcoming retirement after many years with MES. “I have been happy working here. We have seen the company grow and go through many changes, but Mr Baur and the company have always taken care of us and looked after us very well over the years.”

Before he leaves, he is aiming to impart his skills to MES’ younger employees; a task he has already undertaken to a significant degree. In fact, his son, Mbulelo, has already benefited from his knowledge as a fellow employee at MES. 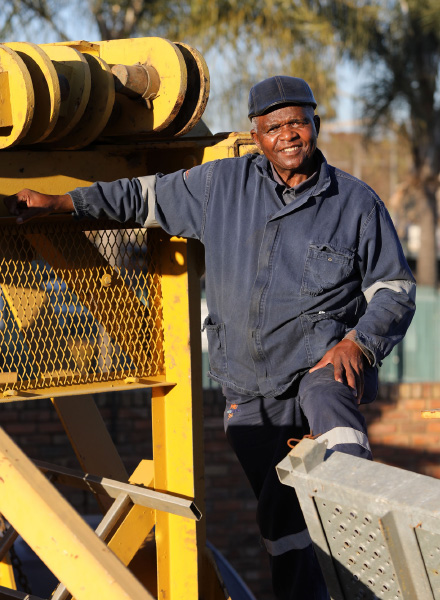 Amos joined MES 30 years ago, working first as an assistant and ultimately progressing through the company’s ranks until he reached his current position as a team leader with his own crew. His role entails maintaining the cranes, establishing and dismantling them.

Amos is also responsible for training the younger employees on the erection teams. He takes safety to heart and sees training others as his legacy. “I have taught many people this job. I like working with people and teaching them, step by step, until they are confident and so that one day, they can teach others,” he says. 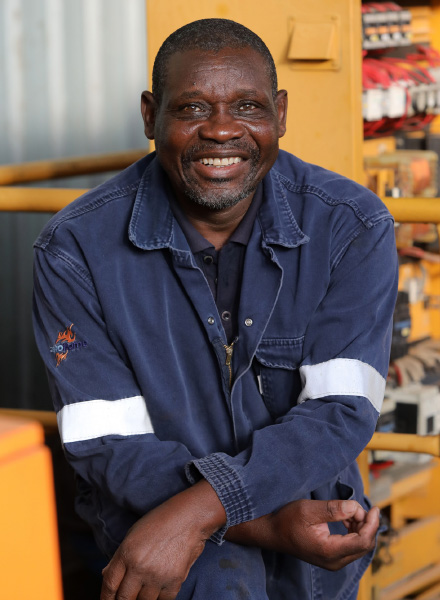 All round skills (40 years)

Benjamin has been with MES since 1981 – most of his working life. During this time, he has gained experience in many different areas of the company, including establishment and disestablishment, helping with the trucks, logistics, and maintenance.

He says, “When I came here from Zimbabwe, I did not know anything about this type of work. I learnt everything here; how to establish and disestablish cranes, maintain them, change and adjust the cranes, the importance of safety, and how to pack and load everything.”

As a long-time member of the company, Benjamin has been involved in the company’s growth and evolution over time and is excited about its next step into the future. 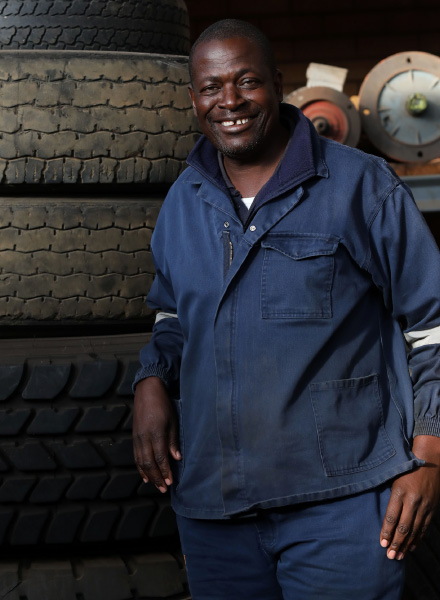 Diligent and dedicated, Chris’s commitment to his job as electrician and lifting machinery inspector (LMI) stems from his understanding of the critical role he plays in the organisation: his responsibilities include signing off tower cranes as safe for operation after they have been erected, as well as repairing and maintaining cranes.

Chris has witnessed a lot of growth within the company since he first joined as a semi-skilled electrician in August 2008 and has experienced the opportunities for development first-hand. “The company made it possible for me to qualify as an electrician and lifting machine inspector (LMI). MES has been good to my family. I am one of triplets, all of whom have worked or still work for MES. In fact, my brother, Floris Hanekom, works at a related company within the MES group.”

An aspect of the job that he also favours is the extensive travelling which takes him all over southern Africa. 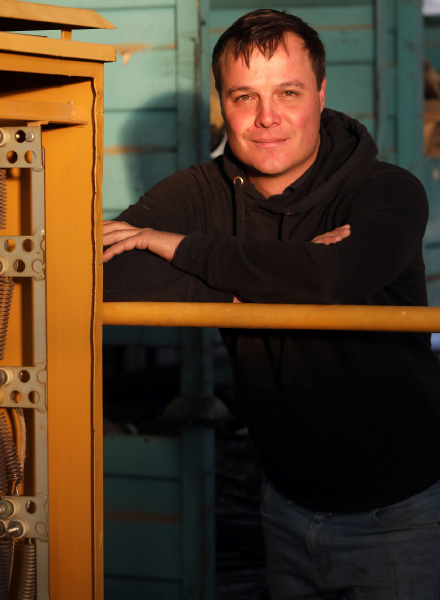 Gawie started his career working in the steel and construction industries after obtaining a Red Seal Certificate as petrol and diesel vehicle mechanic at Olifantsfontein.

He joined MES in 2005, and now works to establish, disestablish, maintain and service the cranes. He also handles breakdowns and electronic components, and solves all other issues related to technical equipment.

As a lifting machinery inspector (LMI), he is, furthermore, responsible for ensuring that the cranes are safe for use. This is a rare skill, as most people are reluctant to work at heights.

It is, however, the maintenance and problem-solving part of his job that he finds the most challenging – and the most rewarding. He says, “It’s incredibly satisfying to arrive on site, knowing that everyone is waiting for you to fix the problem – and that they’ll be able to get moving once you’ve addressed the fault.” 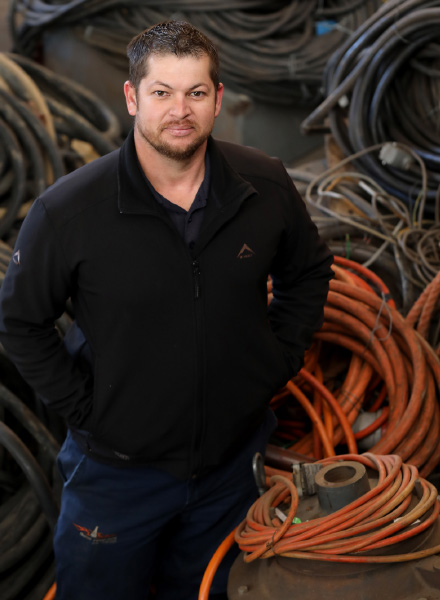 Patrick started working for MES as a crane mechanic in 2001. Having previously worked as a baker, he had no prior industry experience; however, he is a fast learner and worked his way swiftly through the company’s ranks.

He is very proud of his history with the company. “This place raised me. I was still young when I first came here and learnt everything about my job.”

Since 2006, Patrick has headed a team of four people who look after the cranes and provide on-site assistance. He is also responsible for training his team to establish and disestablish the cranes and service them. He prides himself on meticulous attention to detail; an essential quality which ensures minimal interruptions. 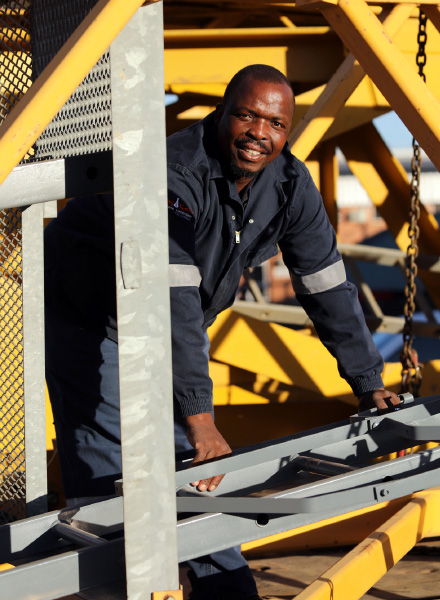 As MES’s safety officer, Sipho is extremely passionate about and committed to his work, ensuring that his colleagues work safely by identifying risks and preventing accidents in the workplace. Sipho’s skill and knowledge allow him to take part in crane establishments and disestablishments, too.

Sipho has climbed the ranks of MES since first joining the organisation as a crane operator in 2006, having worked also as a tower crane erector and a qualified rigger artisan. His experience in these areas of the business have given him a keen understanding of the potential risks involved; contributing significantly to his efficacy as safety officer. He has, moreover, attended a number of safety courses and is a qualified safety officer registered with SACPCMP. He is also a fall protection plan developer, and has developed all the working at heights procedures for the company.

“MES has given me the opportunity to expand my knowledge and I have learnt to care about safety and to implement safety regulations. It is now my thing. Safety first, at all times!” Sipho concludes. 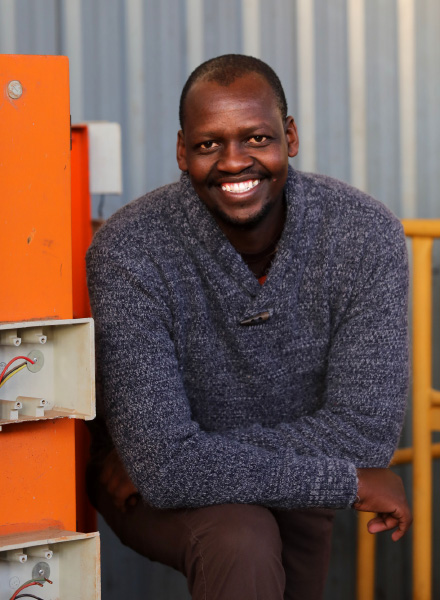 Takalani represents the second generation of his family to work at MES; his father, Joseph, taught him the skills required of a truck driver when he joined the company in 2006, retiring shortly thereafter.

Takalani has a highly skilled job and completed advanced driver training courses to ensure that he is equipped to handle its challenges when operating specialised equipment and heavy-duty vehicles. He also has experience in driving superlinks, and joins the establishment and disestablishment crew when needed.

“I have had a good relationship with the company. If you have a problem, you can always be sure that they will sit down and talk with you to sort out any issues,” he comments. 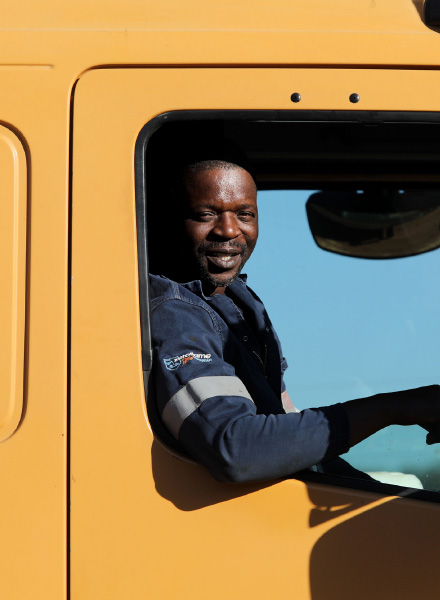 Johnson’s work entails driving the 220-ton mobile crane, operating it and to establish and disestablish tower cranes on site. This is an often dangerous job, requiring very specific skill and experience; work for which he is particularly well suited. Johnson also takes part in establishing and disestablishing cranes.

“The work can be dangerous, as I often work on building sites where construction is already taking place and there are many people working on the site. Similarly, driving a crane on the road poses its own challenges, and requires that other road users are alert to potential dangers,” he says.

With a total of 40 years’ industry experience, he is an entrenched member of the MES team and contributes significantly to its reputation for reliability and efficiency, and adding a great dose of good humour thanks to his colourful, charismatic personality.

“I have learnt a great deal on this job,” Johnson says. “You have to plan the jobs that need to be done. If you don’t plan properly, you waste time and the company has the potential to lose both money and reputation.” 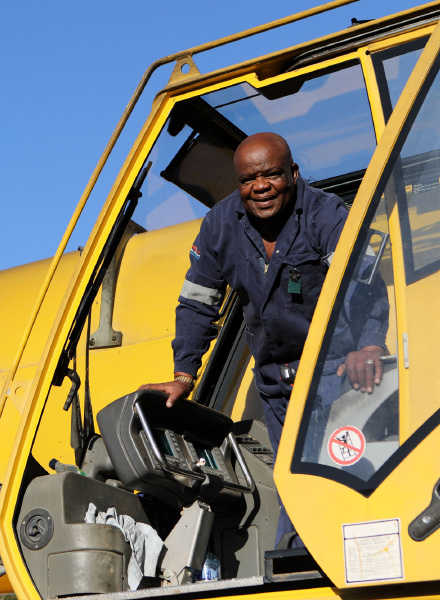 Send a message to info@mescranes.co.za